The phenomenon of using social media has occurred for almost the last 2 decades. At the same time, the desire to get likes and followers on Instagram is getting worse.

Instagram, which previously could only be accessed by iPhone users, can now be accessed by Android users in 2012. This makes Instagram's popularity globally increase.

The phenomenon of “influencers” grows along with the increasing number of Instagram users. With the capital of thousands of followers and tens of thousands of likes, an "Instagram Influencer" can reap profits of up to tens to hundreds of millions rupiahs.

In the early 2010s, business owners competed to use the services of this new breed of celebrity. Starting from providing free products/services to paying up to tens of millions rupiahs for one post.

I have seen the actions of these influencers since 2012 when I was still working as a graphic designer at a hotel in Kuta. At that time, subjectively, I did not see any influencers who had a significant impact on the place of business where I worked.

Because like the duality of life, in all good there is a bad side. Fake Instagram likes and followers are also traded like hotcakes. Especially for new influencers who want fast follower growth, only Rp. 500K, they already have thousands of followers.

These kinds of scams gradually diminish the prestige of the influencers. Both the original and the fake ones. Then not to mention the attitude of some of them, who treat business owners, who supposedly are their bosses, as their servants.

It turns out that this myth is still believed by many people. For fake influencers, they think that buying up to hundreds of thousands of likes and followers can boost their prestige in the Instagram universe.

The ugly truth is not.

Business owners are getting more and more updated with tools like Hype Auditor to check if they have really "influenced" many people, or are they just penniless people pretending to be rich?

Even more sadly, I often see business owners also follow these despicable ways, in the hope that their business looks cool with the many followers they have.

The Instagram algorithm, which continues to update to ward off these fraudulent methods, further reduces the chances of those of you who have already bought followers to expand the reach of your posts to real followers.

For example, you have bought fake followers of 100 thousand followers.

Then every time you post, your posts are only shown to a small number of your followers, which, sadly, are bots.

Where do you want to get money from?

Then how do we increase our business growth through Instagram? Here are some tips that we have done for our clients.

Hard selling posts are the most selfish type of posting. Because posts like this only benefit ourselves. Try to provide value or solutions that can solve your followers' problems.

“You will turn your followers into members of your tribe.”

Humans need about 0.2 seconds to recognize an image, and then decide whether the image is interesting or not in the next fraction of a second.

Instagram is a visual platform. But who can forbid you to upload your main idea to Instagram?

Use a carousel and clean design. Also, pay attention to the white space and font size that is quite legible. Eliminate unnecessary words. Directly convey the essence of your message without further ado.

Captions may be one of the last places that our audience glances at. However, that doesn't mean you can just ignore your post caption.

Imagine this, you've been desperately creating high-value content concepts in your posts. You also made the design as cool as possible. Then when the audience wants to dissect deeper on your post in the caption, you just wrote;

Although it may not be damaging, the post value and the value of your brand will more or less, experiencing a decline in the eyes of your audience.

Take example from one of my heroes; Chris Do. His post already has a high value, but you can get a lot of additional value again after seeing the caption.

Last but Absolutely not Least: Action!

As the familiar tagline says, "Just Do It".

Have you reproduced design references and seen analysis tutorials? Now it's time to create content.

See you in cyberspace. 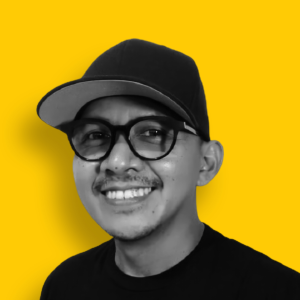